Sometimes, you see one of big social apps copying another, or trying out some new, engagement baiting feature, and your immediate response is just like… ugh.

Apparently, based on a new finding by app researcher Alessandro Paluzzi, who regularly picks up on coming features sitting in the back-end code of apps. Based on Paluzzi’s latest findings, Instagram is currently developing a new feature called ‘Achievements’ for Reels. 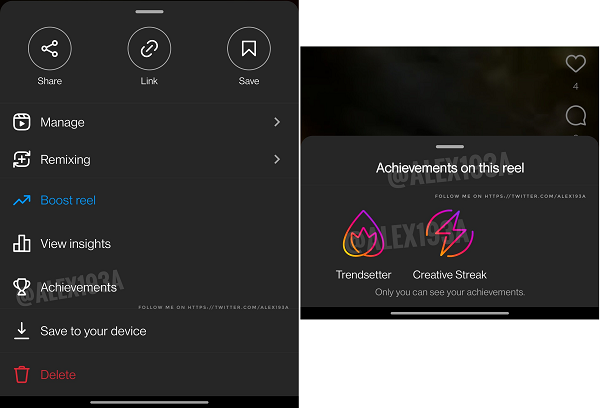 As you can see in these images, there may soon be a new ‘Achievements’ element in your Reels options, which would display certain badges based on your Reel’s performance. Like ‘Trendsetter’ (cool) and ‘Creative Streak’ (rock on).

Achievements, as per the above example, would only be visible to you, with the idea seemingly being that this could function as an incentive element to keep users posting more Reels more often.

Because evidently, Instagram is convinced that users want more Reels, as many as possible, in all elements of the app.

It’s a bit of a chicken and egg conundrum as to whether that’s true or not. Are more people watching more Reels on Instagram because they really like them, or because Instagram’s showing more Reels to you, which lures clicks?

To be fair, Instagram chief Adam Mosseri has said that people are watching more and more video in the app either way, and it’s merely leaning into consumption trends by stuffing more Reels in. But it sure does seem to be leaning pretty hard, to the brink of falling over, at times, in an effort to get more Reels in front of your lit-up face.

Actually, it probably would.

The most immediate comparison here is Snap Streaks, which have almost become religion to many Snap users over the years.

To begin a Snap Streak, both Snapchatters in a chat have to send a Snap (not a chat, an important distinction) back and forth to each other within a 24-hour window. Do that for three days straight and you get an emoji marking the beginning of your streak. Then you just need to keep doing it, indefinitely, forever. Don’t drop the ball on a Streak.

Some Snap users have maintained 6 year long streaks (and counting), and that compulsion has kept many users coming back to the app every day.

So in-app recognition like this does work, and it would be totally unsurprising to see it become a thing on IG as well, if it does choose to roll out these new Reels achievements at some stage.

They could also, potentially, be tied into its Reels Play Bonus program, which sees actual money allocated to creators based on their Reels performance. Maybe, through achievement badges, Instagram could better identify top creators, and invite them to the program, which could keep even more of them posting, in the hopes of being paid.

But it does seem a bit on the nose, right? Again, I get it, it may well work, but allocating achievement badges to keep people posting?

Instagram’s just really keen on making Reels happen, as it works to fend off competition from TikTok, and this is just another element in the broader war for audience affection between the two platforms.

On balance, it does seem like TikTok’s going to win here – though YouTube might still beat them both either way with its more advanced monetization options.

But still, Instagram’s going to keep pushing, and Achievements may be its next play on this front.