SERP features continue on their path towards world domination as the SERP Features Tool shows an old feature appearing in new countries. A familiar feature gets a face-lift and a new addition while Google pursues its medical degree. So without further adieu, may I present to you, last week’s SERP.

Fig 1. Featured Snippets begin to appear in various European countries between June 24 and 25

Conscious intent is of course visible in the fact that the feature began appearing simultaneously within four separate countries, as indicated by the above Insight Graph.

By means of our soon to be released Mobile SERP Features Tracker you can see that the feature began appearing in three out four countries on mobile as well. 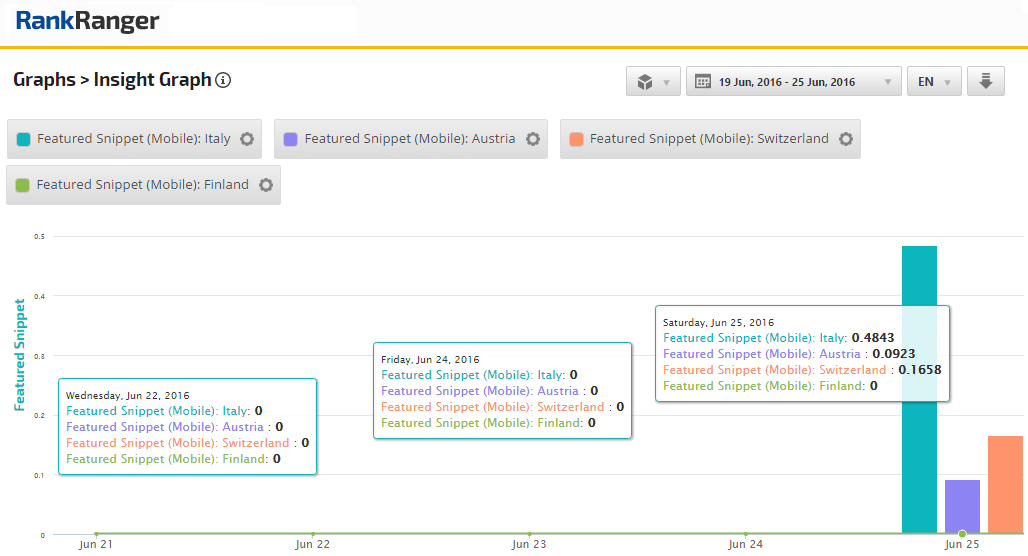 The obvious omission of Finland showing the feature on mobile is quite curious. Though it is important to consider how much of a showing for the feature we saw in Finland to begin with. Looking at the data on desktop in Figure 1 you’ll notice that the feature only appeared within .0187% of Page One results. Thus, Featured Snippets not appearing within the mobile data could simply be a reflection of its minuscule appearance on the SERP altogether. In other words, if Finland behaved anything like Austria, with the percentage of times the feature appeared on Page One being significantly (relatively speaking) less on mobile than on desktop, then finding the percentage of results displaying Featured Snippets on the Finnish mobile SERP would be equivalent to finding a needle in the haystack.

I stumbled on the new data for these four European countries by first coming across an interesting data spike throughout Europe. The percentage of Page One results displaying Featured Snippets in nine European countries showed a relatively skyrocketing spike last week. Though not showing gargantuan numbers in and of themselves, when analyzed as percentage increases relative to previous values I started to see some seriously impressive numbers.

The data here is beyond interesting. For example, we have not tracked the feature showing in Belgium since June 13, however as of the 25th it once again began to appear on the SERP.  From a percentage increase perspective the spikes seen here are astronomical. Measuring the data on the 19th against that of the 25th we see the following percentage increases:

Seeing this data in conjunction with the four countries newly showing the feature altogether creates a staunchly intentful data picture.

In conjunction with the appearance of and spike in Featured Snippets across Europe last week the Rank Risk Index went on a one day surge. In all truth, the mobile SERP has been showing high fluctuations since June 9, hitting a risk level high of 76 on June 25.

As the mobile SERP has shown a prolonged period of volatility, fluctuations on desktop have been within normal ranges, until the 25th that is. On June 25, the SERP on desktop paralleled its mobile counterpart and spiked to a risk level of 79.

Fig 5. The Rank Risk Index for desktop shows high SERP fluctuations on June 25 with a risk level of 79

Seeing the fluctuations on desktop, it would seem that the rise in mobile risk levels on June 25 are unrelated to previous index warmth. The mobile fluctuation levels seen on the 25th seem to be most likely related to what is also occurring on the desktop SERP, which was previously stable.

In searching for the SERP culprit I was a bit taken aback when I saw very little change in regards to SERP features in the US last week. At the same time, outside of a Google test to Local Pack (more on that later), there was not a lot of news circulating the SERP last week, at least none that had already taken effect.

After a bit more research, I came across an interesting shift in some data the SERP Features Tool just started tracking, the ratio between Home and Landing Pages on the SERP.

Starting on June 24 I began to see the percentage of Home Pages on the SERP begin to fall while the percentage of Landing Pages started to shift upwards. What’s significant about this data is that it reflects a shift in how Google is possibly approaching the results it chooses to display, giving renewed propensity towards having more Landing Pages (and with that fewer Homes Pages) appear within results and thus providing the user with a more specific result.

With the pending release of the Mobile SERP Features Tracker I feel obligated to yet again offer a glimpse of its mobile SERP prowess. With mobile SERP fluctuations high yet again last week, even beyond the spike on June 25, it would seem pertinent to take a deeper look at the mobile SERP.

If you’ve been following this blog series, or really just the “Google news” in general, you may know that the AMP (accelerated mobile pages) Project has garnered a lot of chatter. In fact, just last week the AMP Project released a tool that validates the AMP status of your pages (should they be AMP of course). Simply enter your page’s URL and the validation tool will indicate if indeed the page meets the AMP requirements.

The new AMP validation tool was not the only news in the amazing world of AMP. Last week I saw one of the largest two day data drop-offs since the Mobile SERP Features Tracker started tracking the feature.

By June 23 AMP (News Results) had fallen just over 6% from showing within 19.14% of news results to appearing within 13.07% of news results. Interesting enough is that the dip in the data occurred simultaneously to a Googler reaffirming AMP’s significance and future role at a recent SMX conference. I guess someone at Google didn’t get the memo.

Rounding up this edition of the SERP Snapshot is the latest news coming out of Google and the SERP universe overall. This past week saw a test to a feature, along with the announcement of yet another change to Local Pack, all while Google sets its sights on getting its MD.

Ever wonder if you were getting a raw deal when booking a hotel? Well wonder no longer as Google adds a Deal tag to hotel results within Local Pack as part of its latest test. Chances are that if you did a query related to hotels last week a Local Pack displayed with a new green tag reading DEAL. In fact, Google actually listed how much less, relative to the usual price, the room was being offered for.

Interestingly enough, if you brought up more hotel results by clicking More Places at the bottom of the Local Pack, the Deal label still remained. Curiously, if you selected a hotel with such a tag, bringing up the full information panel on the adjacent map, you may have noticed that the “deal” result was in reality an ad, a status that until now was unbeknownst to the user. 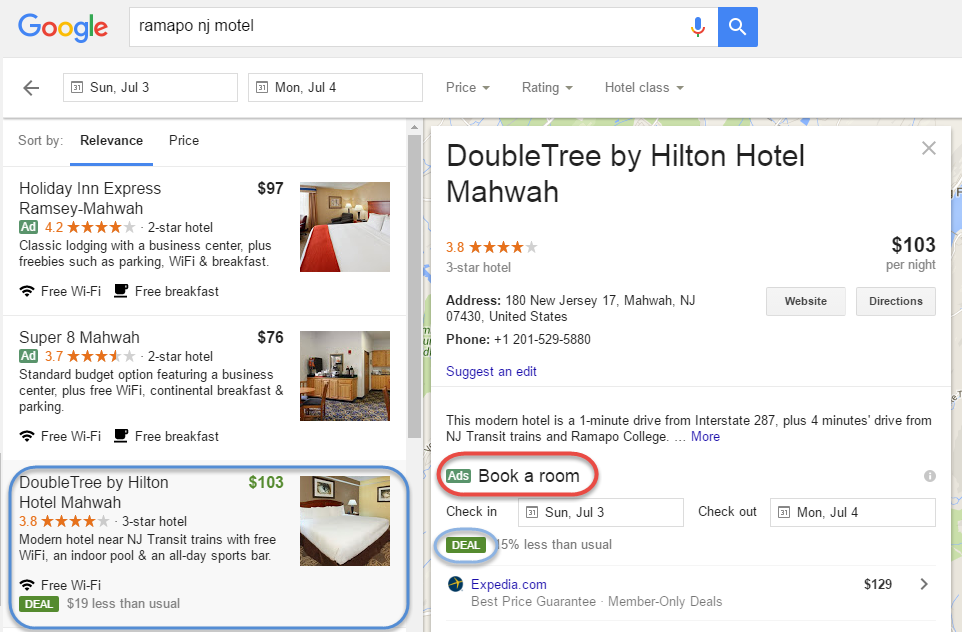 Fig 9. Expanded hotel results from a Local Pack >More Places show the Deal tag remains and upon selection its ad status is revealed

If you refer to the result for DoubleTree by Hilton Hotel Mahwah in Figure 9, you’ll notice that there is no indication of it being an ad, such as there is in regards to the two results above it. However, once selected, and within the expanded hotel information brought up on the right, you will notice that in fact this result contains an ad block.

Seeing ads within Local Pack as indicated above may be news now, but if all goes according to Google’s plans it will become the norm. Last week at the SMX Advanced conference in Seattle, Google announced plans to include one ad within its 3-Pack. This is of course of great concern to local businesses trying to be shown in the feature, as there is now 33% less real estate available to them – unless the ad is part of a local result, in which case competition for that ad will be fierce (and expensive).

Last but certainly not least, Google announced last week that it will offer new ways to display medically related content on mobile. Essentially, if your query relates to medical symptoms, Google will offer you either a list of related conditions and/or an overview that includes self-treatment options. They’ll even tell you if they think you should go to the doctor! 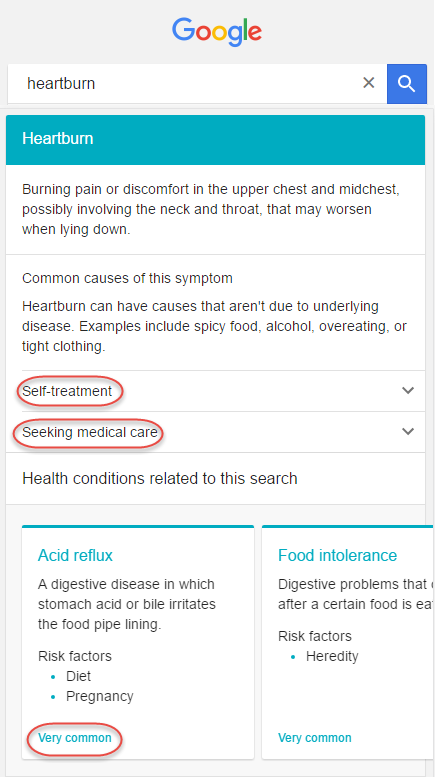 Besides for a general description and causality of the medical condition, Google is also presenting quick access to self-treatment options and information about seeking medical care. This information functions much like Related Questions, with expandable boxes presenting the write-ups.

Underneath the information related to self-treatment and seeking medical care, Google may display a carousel that indicates related medical conditions. Each condition includes a brief summary along with common risk factors. At the very bottom of each card within the carousel is a indication of how common the condition presented is. Adhering to carousel functionality, tapping an individual card will bring you to a new SERP related to the card’s content.

What a week it was on the SERP! I’ll of course monitor how Featured Snippet performs in its new European market. The question is, how high will the feature rise in those European countries that were already displaying the feature since April? Will the new countries follow suit and continue to rise as well?

How long will Google run its test on the Deal tag in Local Pack? Is the announcement of ads within the feature a big deal for users or just frustration for local businesses? How will it impact you?

What do you think about Google playing doctor? Handily helpful, devilishly clever, or just plain ‘ol medically mischievous? How likely are you to follow Google’s medical advice?

Until next time… may the SERP be with you!

Mordy is the official liaison to the SEO community for Wix. Despite his numerous and far-reaching duties, Mordy still considers himself an SEO educator first and foremost. That’s why you’ll find him regularly releasing all sorts of original SEO research and analysis!