Twitter re-launched its $8 subscription package two weeks back, after addressing flaws in its initial roll-out of the option. The main lure of the updated Twitter Blue remains the blue checkmark for paying subscribers, so that they can appear just as important as ‘legacy’ checkmark holders in the app, but in addition to this, Twitter has also promised to incorporate other enticements for your monthly payment.

Now, two of those three additional elements are available to Blue subscribers, with Blue users now able to upload videos up to 60 minutes long, in 1080p, and subscribers also getting ‘priority ranking in conversations’.

The first element is part of Elon Musk’s broader push to get more video content posted to Twitter itself, as opposed to users being linked off to another platform to watch long-form clips.

Musk’s longer-term view is that Twitter will be able to offer a better revenue share for video creators than other video apps, and if Twitter can incorporate monetization, along with a display of tweeted comments in the same presentation screen as video content, that could be another pathway to generating more engagement, and usage.

Though it’s not necessarily going to be easy.

Monetization, of course, is a key lure for creators, and as we’ve seen with TikTok, if there’s an opportunity to make money, and build their audience, then creators will indeed look to share their content in other apps direct, as opposed to linking back to their main channel someplace else.

But more video means more storage, which will add to Twitter’s infrastructure costs, and with this in mind, Twitter will likely find it tough to best YouTube’s current revenue share and generation capacity.

It remains to be seen, also, whether users actually want to view long-form content in the app. Twitter’s main value proposition is short-sharp interactions, in a fast-moving feed, and while Twitter has tried long-form audio, blog-style ‘Notes’ and other forms of more in-depth engagement, there’s seemingly little to suggest that any of these have resonated with the platform’s user base thus far.

That doesn’t mean Musk and Co. can’t change that perception, but there will be a challenge in shifting the mindset of what people come to Twitter for, and that could make it even more difficult for Twitter to incorporate long-form video in any meaningful way.

But there does at least appear to be some interest from high-profile creators.

That seems like a good sign, and Elon seems dedicated to making this a focus moving forward.

It’ll be interesting to see how Blue subscribers use the new option to upload longer clips, and how users engage with those tweets.

On priority ranking, it also remains to be seen how this will impact Twitter usage, and what, exactly, ‘priority’ entails in this respect.

Does that mean that your tweets will always show up at the top of Search and reply threads? And if it does, what does that mean for tweet reach, and subsequent engagement?

On the former, we’ll now have more insight, with Twitter adding public tweet view counts on all tweets this week. 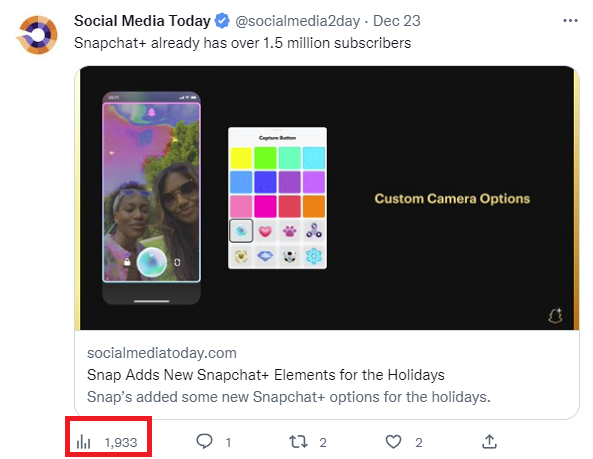 A key consideration here could be that people will now be able to see that Twitter Blue subscribers are getting a lot more exposure with their every tweet, which could work as a lure to get more people paying $8 per month.

But then again, as Elon himself notes:

Twitter is rolling out View Count, so you can see how many times a tweet has been seen! This is normal for video.

If 90% of users don’t tweet, there’s not going to be much value for them in getting priority listings for tweets that they never post.

But still, you can see the logic, and it may work to incentivize more Blue take-up. Or it could cause more users to tweet even less, because everyone will see how little response they actually drive with their tweets.

You can imagine, for example, that influencers, who are trying to bank on their perceived influence, might be less inclined to keep tweeting if everyone can see that, despite having 500k followers, only a few hundred people ever see their tweets.

It depends on what the numbers show, I guess, but there is some logic to Twitter tying this new display into its advanced Twitter Blue subscription offering, and the capacity to boost their reach in the app.

It’ll be worth noting on Blue subscriber tweets, with priority ranking now, seemingly, in effect in the app.